Behind My Iron Maiden Obsession – Part 3

All good things have to come to an end don’t they? I was happily in Iron Maiden la-la land, loving every minute of it. But, then something clicked. I’d realised I’d completely over listened to pretty much everything in my music collection. I’d got bored with my music. Yes, BORED! I’d put far too much focus on listening to full discographies by the small number of artists I like, rather than checking out new artists. So, I went out and bought lots of music by artists I had never heard before. Fresh music was the priority, and I gave albums far more attention. I began to get excited and reinvigorated by my music again.

After the initial rush of new artists, the next step for me was to combine these new artists with the old guard and rediscover some of the albums I’d taken a long break from (that I wanted to listen to again. Not everything was a good revisit, but you know who was one of the best revisits? Iron Maiden. I’m taking my time in hearing all the albums again, but when the songs come on shuffle they sound better than ever. That to me is a sign of a great band that you love. You can take a break and go listen to some  other music but when you come back you love them just as much if not more. 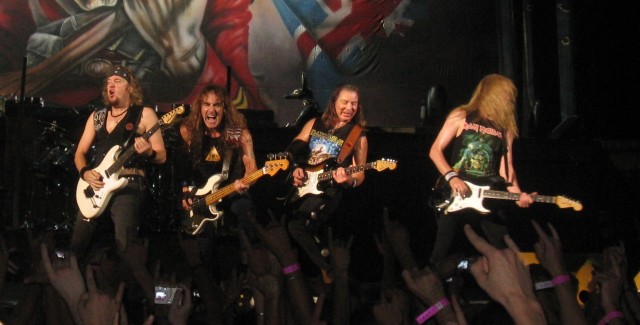 I also fulfilled one of my top goals just last year, I saw Iron Maiden live! I remember when the UK dates were announced, I simply was not going to miss this one. I joined the fan club just to get priority tickets and laid out well over £100 to get tickets for a few of my friends. I just couldn’t wait and it felt like a four-year journey with Iron Maiden had almost reached some sort of conclusion. The day of the gig I met my friends in Manchester and we stayed at the M.E.N literally all day till the doors opened. We managed to get second row from the front and it was a brilliant, brilliant gig. Just been so close to the band was special, especially Bruce Dickinson who is a fantastic frontman and one of my musical idols.

After the sheer ecstasy of the gig, I remember returning to my hotel on my own. The first thing that hit me was the sheer number of Maiden fans. They saw I was on my own, and invited me to join them for a drink. We chatted till the bar closed all about Maiden. I’ve read somewhere that Maiden fans are like football fans who all support the same side. Having seen this first hand, this is something I whole heartedly agree with. The passion, the loyalty and the noise which you see & hear at every football stadium is there at Maiden gigs.

So have I finished my journey? Not just yet, my next aim is to see Maiden on a history tour. They are currently touring a SSOASS set list around the States, and I’m desperately hoping they come to the UK even for just one date. Wherever it is, I’ll be there. I’m secretly hoping it’s Download. A festival which is close to my heart, seeing Maiden headline with that set list would be fitting.

So, that was basically the story of my obsession with Iron Maiden which I hoped you enjoyed reading. Apologies for getting a bit carried away, but it’s hard not to when I’m writing about Iron Maiden. Stay tuned for more posts!

This entry was posted in Metal, Music and tagged Iron Maiden. Bookmark the permalink.