My first gig in a while, I’ll admit of all my upcoming gigs this one had me the least excited. I’ve always seen Tenacious D as a bit of a gimmicky band who make silly songs and aren’t that great musicians. So why did I bother going to this gig? Well, seeing them at Download changed my perception of them a bit. Only a little bit mind, but it still made me curious to see them again with a few of my friends who are big Tenacious D fans and see if I enjoyed them even more this time. We got to the venue with plenty of time so managed to catch the tour bus pulling in, with a slightly grumpy Jack Black in tow. Getting there early meant we could get to the barrier too.

Anyway, onto the bands. The opening band were The Sights. I didn’t know who they were, and judging by the crowds reaction, I don’t think anybody else did either! It’s always difficult playing to a crowd who really have only come for one reason, and you’re not that reason. They played fairly melodic hard rock with keyboards and saxophones, quite often extending fairly simple songs into jams. They kind of reminded me a bit of Deep Purple, but more americanised and not quite as good. They were alright, but got a bit samey after a while. They hadn’t won the crowd in the slightest, and the whole of their set passed by without incident. 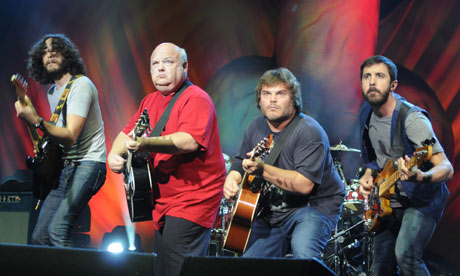 From a band who struggled to connect with the crowd, to one that them eating out of the palm of their hand before they’d even got on stage. Tenacious D fans are extremely dedicated, and generally consider them to be their favourite band. In fact, I had a conversation with someone stood next to me who was shocked when I told him they weren’t my favourite band!

But even for a cynic like me, they certainly didn’t disappoint. From the moment they made everyone laugh by walking on in white robes illuminated with Christmas lights, they produced an electrifying performance which you couldn’t take your eyes off. Jack Black worked the audience like a pro, his wide-eyed silliness and constant chatter keeping everyone engaged. Meanwhile, Kyle Gass (Black’s right hand man in the group) provided a subtle contrast to Black’s in your face humour. 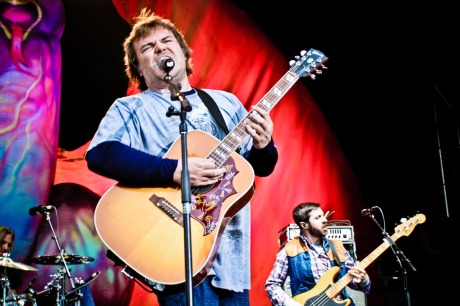 But, amongst all the stupidness (which included the following and much more – an alien squid, jazz fusion, the band splitting up, a giant inflatable phoenix which looked somewhat similar to a penis and an exorcism) it’s easy to forget how good musicians Jack Black and his band are. Creating memorable, catchy songs with some excellent acoustic guitar work is no mean feat, but they make it look easy.

Within a 2 hour set, they effortlessly combined music, comedy and drama. This is certainly no mean feat, and the fact they won over a cynic like me speaks volumes. I still wouldn’t buy an album of there’s, but I would certainly consider seeing them again. So, if you are having reservations about seeing this band like me, you should go see them live. As long as you don’t go expecting an intense metal show, you’ll have a lot of fun. Just like I did.