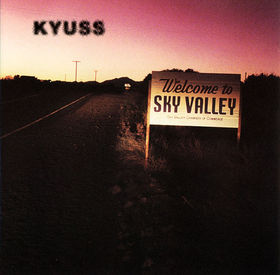 This is the sound of a jeep roaring across desert plains. The sound of friends sat by a campfire, watching the sun rise & set with a few beers losing track of time.

Another milestone in the stoner rock scene, this is one of those albums that has one of those cultish followings. The internet is just full of people who love this album to death, which is remarkable for a band that used to play gigs in the desert with generators.

I didn’t get the hype at first, but repeated listens illustrated to me just how good this is. Kyuss generate this explosive desert groove like none other I’ve heard. There’s a few trippy moments, but for the most part this goes straight for the jugular. The rhythm section lays down the markers, with the Josh Homme producing riffs like a man possessed. John Garcia’s vocals soar over the brilliant noise, which is no mean feat but he absolutely nails it.

If you don’t like it at first, persist with it. It’s such a sprawling album that it’s a lot to take in at first, but once you get it you REALLY get it. I can’t count the amount of times I’ve come in from work after a long day, and just completely lost it to this album. In fact, I struggled to review this album at first cause I was doing just that! Oh, and for maximum enjoyment with this album, add sunshine as well as beer. You’ll thank me later.