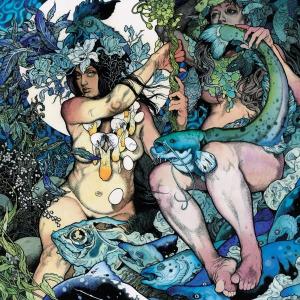 I’ve got a huge amount of respect for Baroness. For a band to bounce back from a horrific bus crash (minus two of the original members) shows tremendous strength. Just read this post from the year anniversary of the accident here and tell me that’s not amazing. Before the crash, Baroness were already making waves with some remarkably different metal albums. Though they seem destined to be forever in the shadow of Mastodon, who broke from the same scene about the same time I believe. It’s unfortunate, but I think anybody who listens to both bands will appreciate the differences between the two and love the pair of them.

Whilst it could be argued that Baroness belong in the sludge metal scene, their sound is unique and it’s difficult to really pigeonhole them. That to me is a sign of a special band who should be applauded. On this album the riffs are sludgy, but with a big dollop of Led Zeppelin like folky melody thrown in. It’s an album with an organic beauty to it and quite often I find myself closing my eyes and imagining myself in some strange mystical, fairy like land. Yet, this melody is perfectly balanced with some thundering metal riffs and shouted vocals. It really hits a sweet spot for me.

I’d recommend this to anyone who likes their rock and/or metal to be a bit different and alternative. If you’re a sucker for melody you’ll probably lap this up too.

This entry was posted in AOTY2013, Metal, Reviews, Rock. Bookmark the permalink.